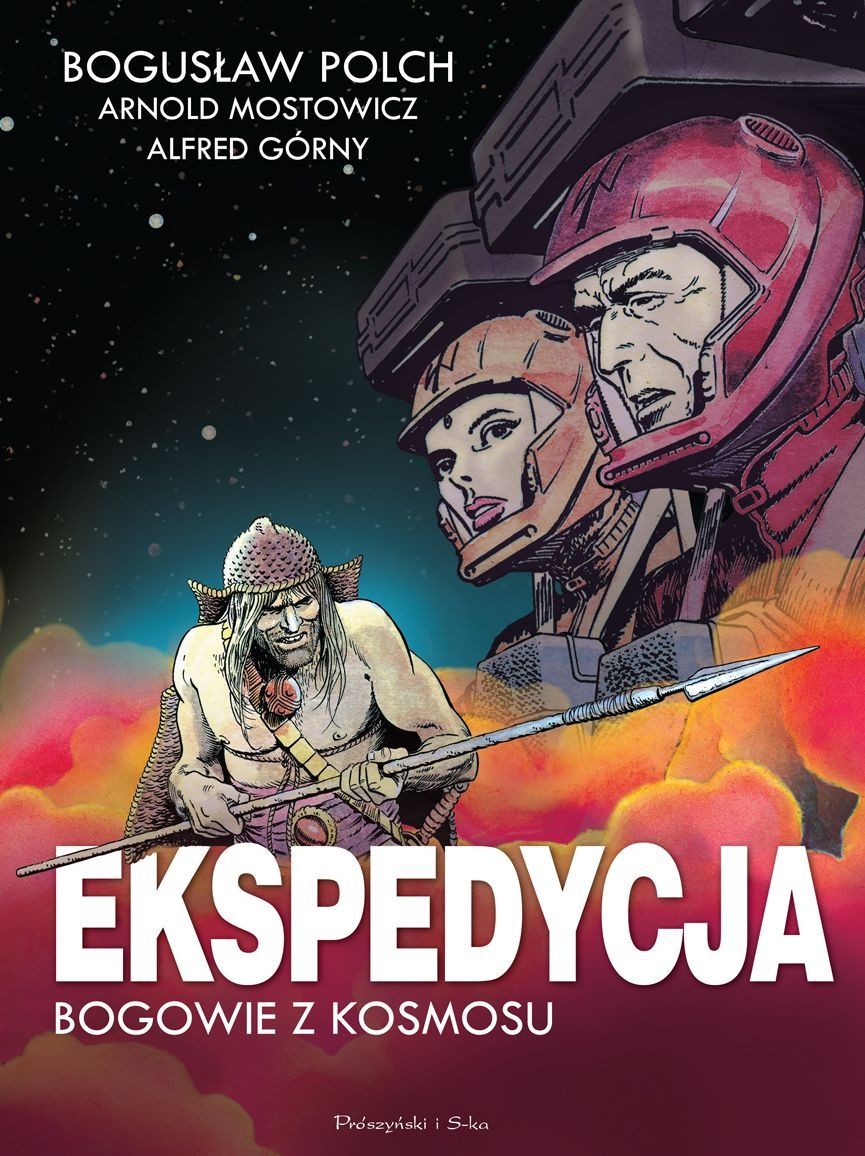 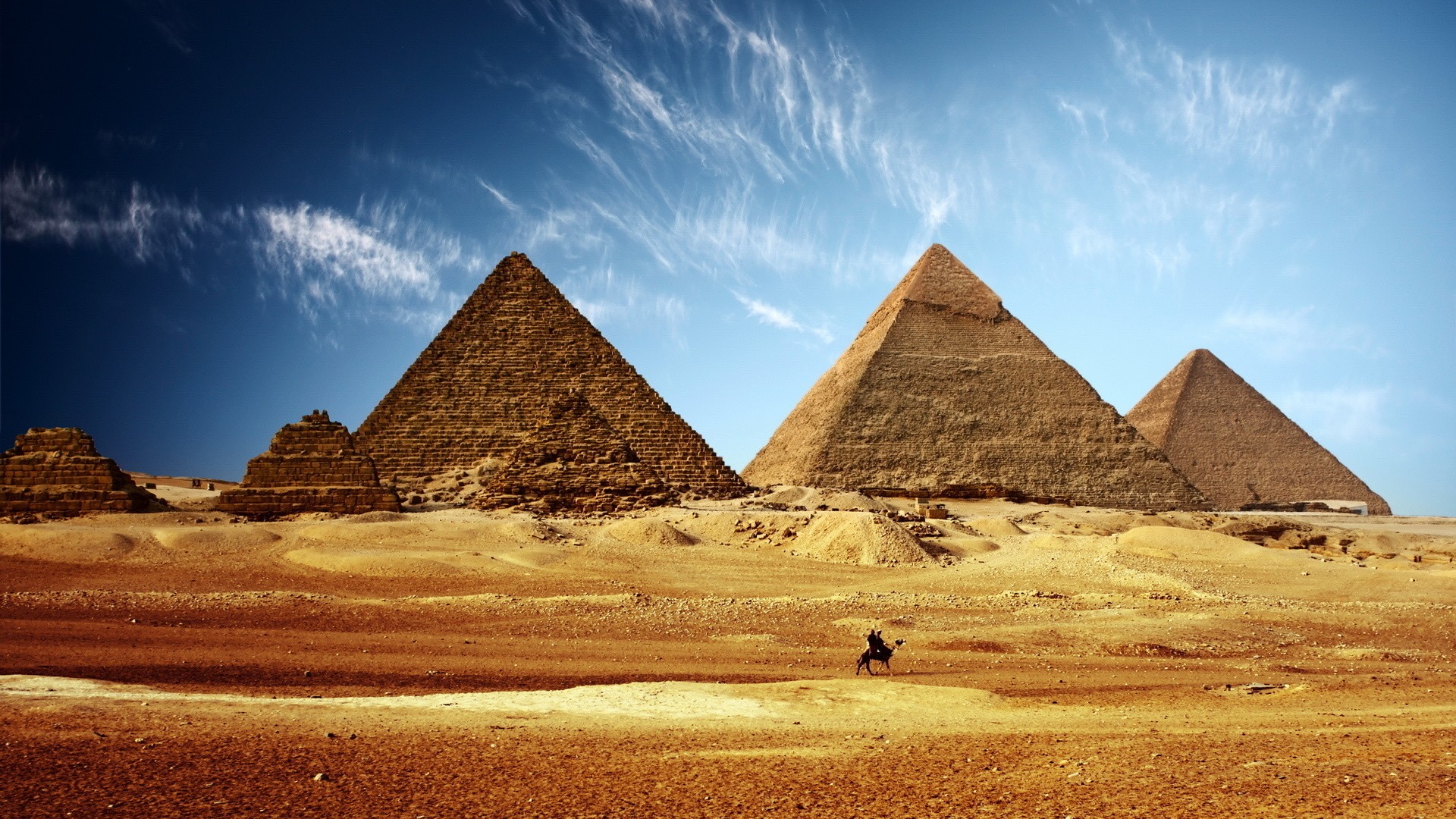 Erich von Däniken's reveals startling evidence that an alien race helped to create the pyramids of Egypt, a claim he based upon the ruins themselves.

And it is these ruins that now provide researchers with a never-ending source of clues, compelling discoveries, revelations, and evidence that Earth was indeed colonized by an alien race: -Research showing that the location and design of the pyramids were uniquely fit for preservation-something the Egyptians couldn't possibly have known.

Remains of the ships built by the Pharaohs and buried with them for travel in the afterlife-imitations of the ships they saw used by men from the sky.

-The most recent discoveries-hidden chambers and passageways, one of which ends at an ancient door.

And behind the door is...the unknown.

-Prehistoric bones that prove the existence of a worldwide cult that deformed children's skulls in imitation of the "gods" they had seen.

Erich von Däniken's theory is the most famous approach to solve the mystery of Nazca.

He provides evidence that a long time ago visitors from other stars visited the earth and naturally Nazca.

At this place they landed, during the landing stones was blown away by the power of rocket propulsion.

By approaching more the power was increasing and the cleaned band broader.

In this way, the first trapezes emerged.

Like in the modern cargo cults they tried to call the Gods back by drawing lines, figures and trapezes.

Despite many attributing it to him, Erich has never said the formations were made by Aliens.

Impossible Truth of High Technology in the Ancient World

Join Erich von Däniken on a journey through the unsolved mysteries of our past.

Features astounding theories about alien contact with the Earth from earliest times, updated with new evidence from his research into formerly inaccessible sites.

Why do flying machines and astronauts appear in the artworks and sacred texts of all ancient cultures?

What is the meaning of the immense earth drawings, impossible to view from the ground, that can be found all over the globe?

How could prehistoric cultures have engraved diorite and other hard rock with such incredible precision without the use of modern tools?

Erich draws on his latest research to update his astounding theory that the inhabitants of other planets have kept in contact with humankind since the earliest times.

Archaeological Findings from All Over the Globe Show Ancient Astronaut Evidence

Erich von Däniken has exhaustively researched and analyzed the great world religions, their myths and belief structures, in an effort to find an answer to a question that has fascinated humans for millennia: who, or what were the Gods described in ancient stories?

The Gods were not metaphysical beings born of humanity's overactive imagination, but extraterrestrials who left traces of their presence everywhere on Earth.

Forbidden Knowledge Strange Unexplained Events of the Past Fully Explained

When Chariots of the Gods was published 50 years ago, it began a worldwide change in humanity's view of the cosmos.

In an era of the military space race, Erich von Däniken boldly proclaimed that Earth had been visited by more advanced beings early in our history.

But the prescientific man had no concept of spaceships, so he called their vehicles "chariots", and those driving the chariots became "gods".

Over the next five decades, von Däniken's 32 books built an ever-stronger case for Earth being visited by extraterrestrial visitors.

And Chariots became an international bestseller, with 30 million copies sold in more than two dozen languages.

Also during that time, the case for ET visitations millennia ago was being reexamined by contemporary UFO researchers, who found evidence of modern visitations.

And von Däniken expanded his perspective to encompass the present.

With special thanks to AWAKENINGUFO.COM

Chariots of the Gods? bestselling author, Ancient Aliens co-star and popular ancient mysteries researcher Erich von Däniken on whether the gods of antiquity were in fact astronauts.

This is what happened: Extra-terrestrials visited our Earth many millennia ago.

They behaved similar to how current ethnologists behave today.

They studied a few languages, visited different tribes, gave suggestions and disappeared sometime - however, with the promise to return in the distant future.

Our Stone Age ancestors could not grasp what happened back then.

They wrongfully believed that the extra-terrestrials were gods.

The supposed then wandered into our mythology and became the founders of many religions.

With special thanks to Nexus Magazine.

Archaeology Discoveries That Show Something is VERY Wrong With Our Past

Something is wrong with our past.

There exist structures that could not have been created by technologically-untrained Stone Age peoples.

There are global petroglyphs and religious rituals that are all related to each other.

There are writings of ancient historians reporting on cultures and data about which the official archaeology field wants to know nothing.

Erich Von Däniken explores the latest discoveries in the fields of prehistory, mythology, lost civilizations, and the mystical wisdom of ancient cultures from the Egyptians to and beyond.

With special thanks to Edgar Cayce Foundation.

Was mankind visited by aliens in the distant past?

This enduring question became the foundation for his widely renowned first work, Chariots Of The Gods. Erich postulated that our planet had been a stopover point thousands of years ago for interstellar visitors who shared futuristic technology with ancient civilizations.

Not only is von Däniken convinced that aliens visited Earth in the distant past, but he’s equally certain it will happen again in the very near future.

On October 15, 2016, The Princess Anne Theatre, BAFTA, 195 Piccadilly was the venue for an evening where a keynote presentation by Erich von Däniken who showcased his most monumental and influential speeches and describes his findings and breakthroughs in developing the Ancient Astronaut Theory.

Erich explains how something is wrong with our past.

There exist structures that could not have been created by technologically-untrained Stone Age peoples.

There are global petroglyphs and religious rituals that are all related to each other.

There are writings of ancient historians reporting on cultures and data about which the official archaeology field wants to know nothing.

Evidence of ancient aliens can be found all over the world, from Egypt to Peru, Thailand to Bolivia the phenomena was worldwide.

It's intriguing to hear an alternative theory for much of ancient history that are currently left unexplained or simply vaguely explained with improbable, yet currently accepted, theories.

Däniken made sure never to tell you what to think, but rather he asked the right questions.

Erich Von Däniken Ancient Archaeological Discoveries That Will Surpise You

Erich von Däniken, one of the best-selling authors of all time and regarded by many as the father of the ancient alien theory, continues his mission to uncover Earth's ancient past.

There is much to explain about our past, Erich looks at everything from Sumeria to Ancient Egypt and explains in detail what the clues are telling us.

Extraterrestrial visitors left their unmistakable traces on our planet thousands of years ago and luckily we have someone here who can help us understand exactly what happened.

Mounting evidence is becoming more difficult to ignore and refute. It is little wonder that this genre has become more prolific.

Erich Von Däniken Mind Boggling Discoveries From All Around the Globe

Explanation-defying artefacts and phenomena features ancient geoglyphs, stone circles, giant images scraped in remote patches of ground, the transportation of massive works of stone, and other such mind-bogglers scattered across the world.

For over 45 years Erich von Däniken has theorised that the Earth might have been visited by extraterrestrials in the remote past.

His books have been translated into 32 languages, selling 65 million copies worldwide, and he has contributed to numerous film and TV productions and has written countless articles.

Erich von Däniken continues to be an avid researcher, travelling 100,000 miles per year to the Earth's most remote places.

Erich paints an alternative theory for much of ancient history that is currently left unexplained or simply vaguely explained with improbable, yet currently accepted, theories.

You will see great views of ancient buildings!

Why they are there and how they built them in ancient times!

Von Däniken will certainly gets the mind thinking outside the box!

What if we are descended from aliens, as Erich suggests?

Erich Von Däniken. - For curious minds who are questioning life and archaeological discoveries of unexplained,

Von Däniken liberates our mind to what probably was but got lost in history by conventional religious and then government tactics over the years of human history.

If you are in any doubt about the existence of a God then watch this.

The most incredible thing here is that Erich von Däniken's has proof that we are the descendants of galactic pioneers—which he reveals with archaeological discoveries.

Von Däniken is a master storyteller weaving his theories with facts from around the world.

The Pyramids- how were they really built?

The Temple of the Sun and the etchings in the walls.

Easter Island- where did the statues come from.

How did ancient civilizations query and transport boulders so massive they would challenge even modern machinery?

There are many questions that will be answered here.

"Chariot of the Gods" was written over 50 years ago and was one of the first books to discuss the possibility of visits to Earth by extraterrestrials.

Erich's writing style, observations, and analysis of the evidence used by mainstream science anchor theology to explain the presence of artifacts, writings and other materials, coupled with his alternative explanations and proofs are not only plausible, but also down right convincing.

He provides the facts and asks the viewer to draw their own conclusions.

To say this book was controversial in the late 1960s and early 1970s is an understatement!

The amazing thing is that many of his early conclusions have gained wide acceptance with millions of people.

Ancient Astronaut Theory is no longer fringe science and we have Erich to thank for it!!

Erich Von Däniken is a master storyteller weaving his theories with facts from around the world.

The Pyramids may hold the clues we have been looking for, join us as we take a peak at the secret passageways inside the Great Pyramid.

How did ancient civilizations query and transport boulders so massive they would challenge even modern machinery?

For what purpose were giant structures and drawings that could only be viewed from space?

Why did religions spanning the physical earth, and without regular contact with one another, share such similar stories of origin?

How did ancient cartographers gain knowledge of seemingly "undiscovered" lands and ancient astronomers of planets and galaxies only recently observed with modern optics?

Erich Von Däniken dares to go outside the theories of conventional archaeologists and historians, to postulate whether primitive cultures had contact with alien life forms.

Have beings from other worlds influenced ancient histories such as the Egyptians and Mayans.

The artistic references to otherworldly beings in the bible - what could they mean?

While we may never know the truth in our lifetime, we can certainly keep our minds open to the possibilities--and Von Däniken presents fascinating ones!